QATAR quietly quells any unrealistic fears of the Middle East 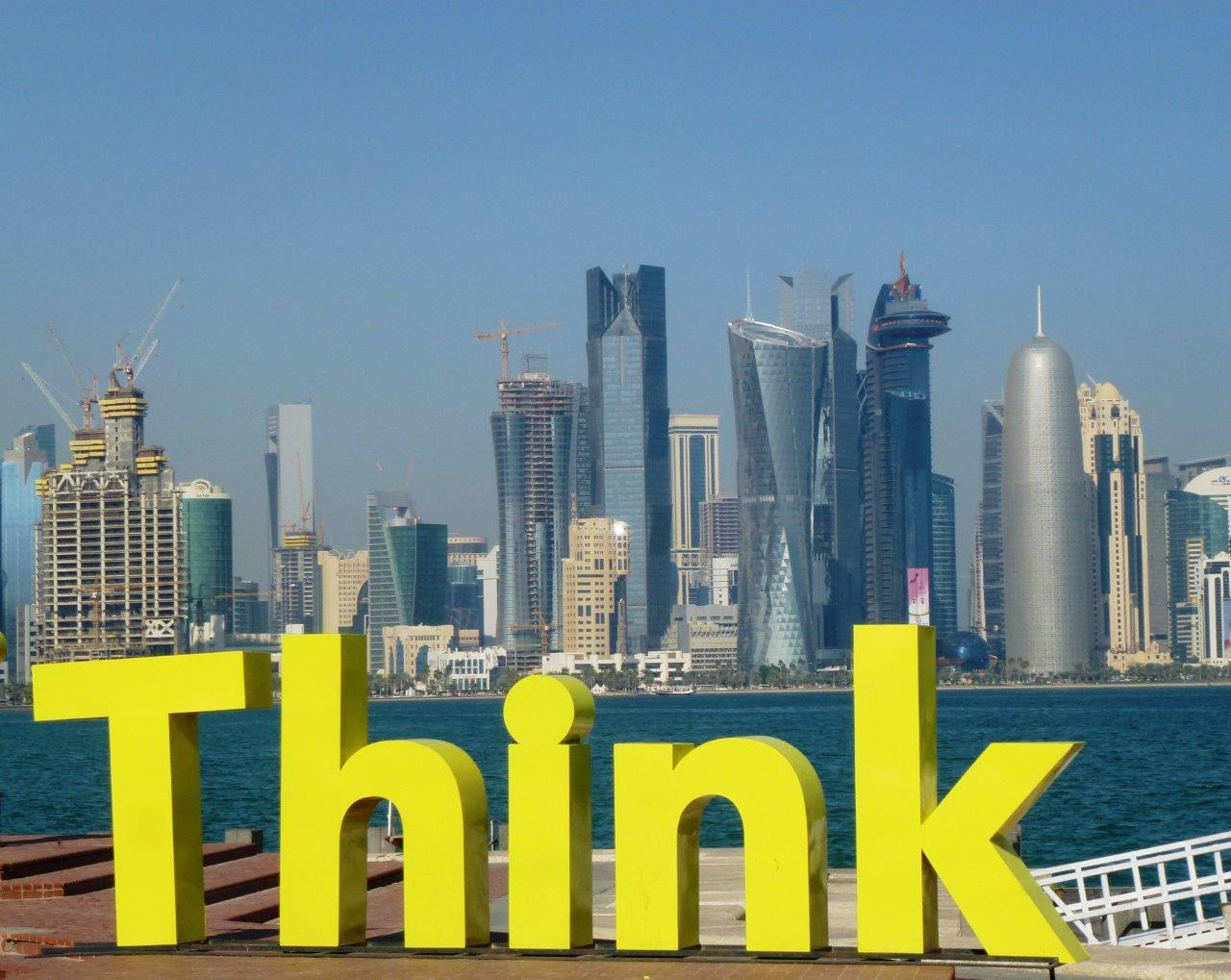 QATAR quietly quells any unrealistic fears of the Middle East

QATAR quietly quells any unrealistic fears and stereotypes that you may have of the Middle East—and you won’t be disappointed.

From the moment I first checked in to their national airline, the international crew did their best to put passengers at ease for the fifteen-hour flight from Melbourne to Doha.

‘I hope there are no terrorists on board,’ the fifty-something Botox blonde next to me whispers as a handsome bearded Arab man, about the same vintage, walks down the aisle, proudly wearing his pure white traditional floor-length thobe and carrying a Louis Vuitton briefcase.

‘I couldn’t get on Qantas and am meeting my husband who is in London on business. His company travel agent convinced me it was only a short stopover but I do hope we’ll be safe and they give me a few stiff whiskeys to get through this. These Muslims don’t drink you know.’

As if on cue, a flight attendant arrived with a flute of French champagne.

After two quick swigs, she asked: ‘And, where are you going?’

‘Eventually Amsterdam but I’ll stay in Qatar for a few days.’

‘Is your husband working there?’

I informed her that there was currently no husband working—or even in working order.

‘Surely you’re not on your own, Darling? What about all those Muslim men who don’t like women?’ Why on earth would one ever go there? she pressed.

‘Simply because I have never been to a country that starts with a Q…and although a lifetime Qantas gold member, Qatar Air was both cheaper and more convenient on this occasion.’ I smiled and hoped the noise cancelling headphones would silence any further conversation.

Convenient it was, with efficient customs clearance and metered taxis to transport guests along the clean freeways of the capital, Doha. Reaching my hotel in the old town, I showered and decided to walk to the one of the malls in the new town as it seemed a direct route to one of the shopping centres harbouring designer labels, an ice-skating rink and a food mall for lunch.

The receptionist muttered something about mad dogs and Englishmen as she reluctantly handed over a map.

A few days before Christmas, it was a perfect winter afternoon of 26 degrees Celsius, compared to the scorching 50 degrees it might reach in summer. Despite pleasant weather, the 7-kilometre stroll along the Corniche that snakes around the Persian Gulf, was almost deserted.

Passing the Islamic Art Museum, I veered left towards 6-foot-high fluorescent yellow signs— ‘Think’ and ‘Realise’—on the foreshore of the old town. I believe they were a temporary installation that seemed symbolic of a wider gulf of generations, where traditional Dhows bobbed beneath the gaze of a futuristic skyline of architectural awe on the other side of the water.

Dressed modestly in pants, long-sleeved shirt and head scarf, I was somewhat surprised when a young female jogger in tights and a sleeveless top stopped, removed her earphones and asked if I’d take her photo. When I tentatively asked about dress standards for women, she laughed. ‘Not everyone is as strict a Muslim as my mother. You do not need your head scarf.’

As I gladly removed it, she informed me that that women gained the right to vote at the same time as men for the first elections held on March 8, 1999 coinciding with International Women’s Day.

‘What hotel do you stay at? Some of my girlfriends are meeting after dinner tonight. Would you like to come? I will call you.’

As she jogged off, I never expected to hear from her but felt at peace looking from the old town to the new; a strange serenity in a city of strangers. I was alone, anonymous, and at one in a nation built on oil where some palms are no doubt greased; as the one above me swayed gently in the afternoon breeze.

True to her word, there was a message back at the hotel and I joined three young thirty-ish women at the trendy, luxurious Pearl development built around a lagoon.

‘Four years ago, this was all just a desert. But tonight, we enjoy dessert!’ one laughs. It seems an old joke between them.

‘In Qatar, there’s the old town, the new town and every year a newer, always more luxurious town.’  There is no income tax because of oil revenues and in 2021, Qatar was named the wealthiest country in world per capita.

Three of the women sipping mint tea and scoffing rich French pastries are expats; a Muslim from Tunisia, a Catholic from Portugal and a Christian from Iran. A lapsed Presbyterian, old enough to be their mother, I join in a common conversation the world over about fashion, food, movies and men—or lack thereof.

‘We are lucky to live a good life here but we must be careful because you can be lashed or stoned for adultery, blasphemy, taking illicit drugs or drinking alcohol. It’s possible to apply for a permit to drink alcohol but it’s not worth it. We will die of sugar overdose I think’, they laughed and reached for another chocolate éclair.

The women were all expatriates in a country with a population of 2.3 million expats and only 313,000 Qatari citizens! They’re more fortunate than many Third World National migrant workers who pay exorbitant fees to recruiters in their home countries of India, Nepal, Bangladesh, Pakistan and the Philippines. Most work in hospitality or on construction sites under oppressive heat, live in squalor, and are subject to labour rights violations that include beatings, sexual assault and confiscation of passports by many unscrupulous employers.

‘Did you know that children were used as camel jockeys until 2004, when it was ruled too dangerous. Now robots race the camels in Qatar—but betting is banned!’

My three new friends agree that they lead an unusual lifestyle but generally enjoyed living in the country that has been ruled by the House of Thani since the monarchy’s independence from Britain in 1971.

Qatar has emerged as a significant power and for its size, wields disproportionate influence in the world partially due to its globally expanding media group, Al Jazeera. Journalists practice self-censorship, because public criticism of the royal family or government is illegal—a practice politicians in the West may well support.

This Middle Eastern nation remains an ally of Canada, France, the United States and the United Kingdom following the Gulf War and invasion of Iraq. Even my alma mater, the University of Calgary, has a satellite campus in Doha; not all that surprising since Calgary is the oil capital of Canada.

I succumbed not to nostalgia on Christmas Eve but welcomed the morn by following my nose to a hole in the wall oven where a queue of people awaited freshly baked unleavened bread.  Following some of the patrons to a nearby mosque and cultural centre, I was warmly welcomed and given a burqa for a half day immersion course in Islam and encouraged to pray five times each day. It may well have been akin to brain washing but what harm could be done to repeatedly ask: ‘Show me the truth.’

The truth of the matter was that no one ever hassled me in Qatar and I felt completely safe in an alien environment, even though in March 2005, a British teacher was killed by a suicide bomb in a theatre, shocking the country, which had not previously experienced terrorism.

In the cooler evening, I wander down to the busy souk, bustling with an array of Arabs and varied expats smoking hookahs, listening to music and dining on a variety of international cuisines. It seemed somewhat sanitised and surreal as if I’d popped out of the bottle like some genie and instantly become an extra on the Aladdin set of a Disney movie.

Then, as I buy a refreshing lemon and mint juice from a Nepali vendor, I remember that Third World nationals are forbidden to socialise, and some of the magic of the moment succumbs. Too many of these workers have died while constructing venues for the 2022 FIFA World Cup, making Qatar the first Muslim and Arab country to host the event. Yet amidst controversy of possible bribes and human rights abuses, one can’t help but think that this small country still kicks some worthwhile goals.

On my second stopover in July, it’s 43-degree Celsius heat, so there’s no leisurely stroll along the Corniche, as a taxi takes me to the air-conditioned shopping centre to buy some tax-free sneakers and an ornate box of stuffed dates for a friend in France.

Somewhat jet lagged, I order an espresso and sink my weary self into a comfy seat of a corner window of Starbucks to watch another world drift by. Before savouring my second sip of coffee, another customer approaches and motions to the adjacent leather chair. I nod.

We talk of ‘smiling eyes’ but I’d never truly seen someone smile with their eyes until I came face to face with this stranger in a black burqa. Her dark chocolate irises and pupils were the only visible parts of her entire body. But I felt her smile. That realisation sent shivers up my spine on that sweltering 43-degree desert day. Those goosebumps were another unsuspecting reminder of the notation in my autograph book from the school principal in eighth grade, another lifetime ago:

‘Smiles are passports through deserts.’

If only my Botox-blonde seat companion on my first flight to Qatar could realise what she had missed.