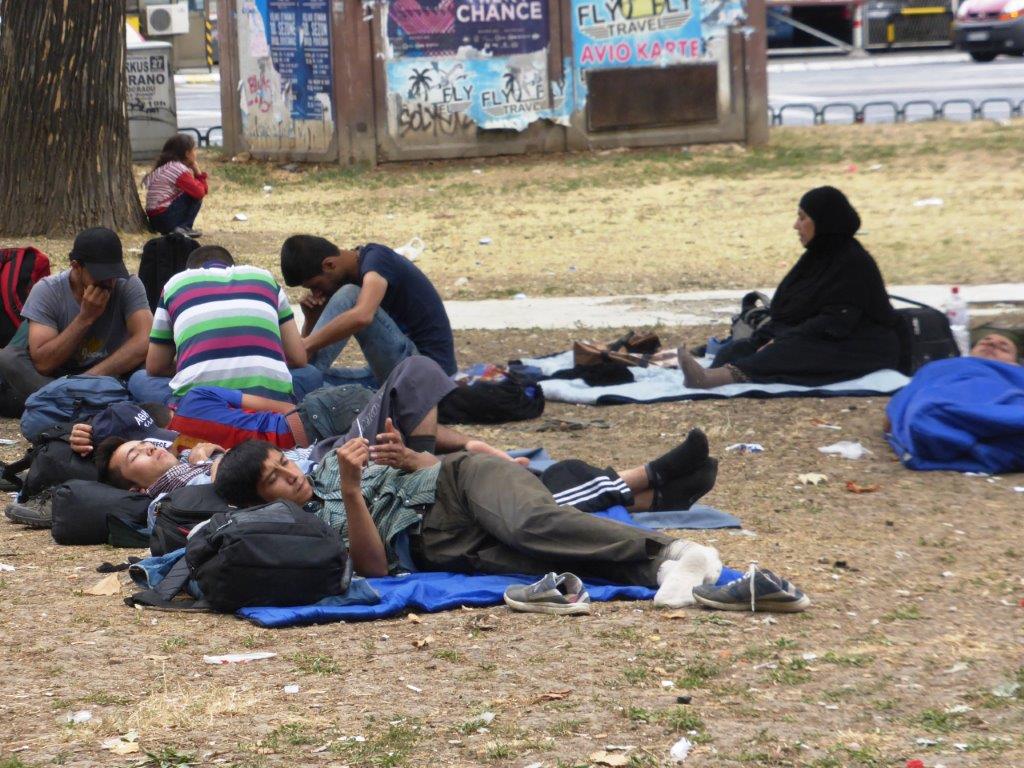 As a middle aged, middle class Western woman, I don’t hang out with young, unshaven Middle Eastern men on a Saturday night. So why was this evening so far-removed from my normal behaviour; them so far-removed from their homeland?  Yet, so close to the core of our collective humanity?

Let me try to explain-if I can.  Months later, after return from a makeshift Syrian refugee camp in Serbia, I still struggle to make sense of the senseless situation as we greet 2016.
Let me clarify. I am not an aid worker, social worker, politician or activist and have no answers to the enormity of the immigration problem; not just in Europe but in our world.

I just happened to visit Serbia in the process of researching a new book. It was 40 degrees at 7PM when I checked into the hotel. Hot and tired from travelling by ferry, train and plane from Greece, I wasn’t nearly as exhausted as thousands of refugees, who unbeknownst to me were also in Belgrade having made part of the same journey-on foot.

My passport and phone were in the hotel safe as I’d been robbed in Barcelona. Wary of wandering alone at night, I still needed to eat so headed down the main street with just a small amount of cash.  Nearby was a hole in the wall pizza joint which looked clean with a busy turnover in the takeaway window and just two benches inside the tiny air conditioned premises.

I ordered and sat on one bench. With no phone to check Facebook and no papers to read in English, there was nothing to do but resort to the old fashioned pastime of people watching. That admittedly needs a bit of honing in this electronic age, I mused to myself as I noticed five young men at the next bench all on their phones and not one engaging in conversation with the other. Interesting I thought, feeling simultaneously somewhat superior and inferior without my smart phone for company.

I noted that the staff asked them to pay for their pizzas in advance but I wasn’t asked until mine was delivered.

They shuffled to fit their large pizza boxes around the bench, whereas I had ample space at the adjacent bench. With open palms, I motioned that they’d be welcome. Two joined me with shy nods and silently tucked into their food; phones temporarily forgotten. Unsure if they spoke English, I tentatively asked:

‘Where are you from?’

‘Syria’ they replied in unison.

It wasn’t the reply I’d expected. ‘I am sorry what is happening in your country’.

‘So are we.’ And the conversation commenced.

The three Christian and two Muslim students had been at university together and were heading north to Norway in a car, taking turns driving day and night. Unshaven and undeterred they were well dressed and had the latest smart phones. Surprised the two faiths were travelling together,  I confessed confusion about the situation in their country. I didn’t admit the many times I’d been guilty of just seeing more terrible atrocities as ‘wallpaper ‘ on the evening news…’Oh another bombing’- just as we don’t really pay attention to motor car accidents at home unless it’s someone we know or an unusually spectacular pile up.  I asked if they could explain the situation to me as they would to a twelve year old child.

‘We don’t 100% understand why this is happening either. We didn’t want to leave but have no choice if we are to live.’

I’m now going to admittedly over simplify what I understood they told me. It is not 100% politically accurate but to frame it in terms we can easily understand as Australians. Imagine that the state of Victoria (237,000 sq km) was Syria. (186,450 sq km)

Imagine our leader decides to wipe out anyone who has a different faith or opposes him. It’s a civil war and our neighbour across the street today may become our enemy tomorrow; except there are more than just two factions fighting each other. It seems there are civil wars within civil wars.

In the meantime, ISIS and/or ISIL see a weakened state and also invade. So it’s internal conflicts combined with other brutal external conflicts. Imagine Albury is under attack today-Wodonga next week. Then another faction bombs Geelong. Forces loyal to the other side move into Melbourne and wipe out half that city. The art gallery and MCG are destroyed-possibly by ‘friendly ally fire’ but destroyed none the less. If we’re living in Bendigo, we can’t help but think who will be next? Our home, university, office block? Maybe the school our kids go to or the local hospital?  We too would want to get out of Dodge before it’s too late.

Let’s not debate whether they are economic or humanitarian refugees-they go hand in hand-and they need a helping hand. Ever heard of workplace safety?

‘What can countries like Australia do to help?’ I ask.
Should I be proud or ashamed that I’d never protested although often forging my way to work through such protestors outside our former Prime Minister’s electoral office.

‘Tell your Prime minister to let us into your country’. I didn’t mention he was my local member of Parliament-but did say it wasn’t quite that simple.

Many people I spoke to in Greece, Italy, and Holland told me they wished their leaders had the courage to stop the tide of refugees. Skiing in Lebanon last year, it’s estimated there are now as many Syrians as Lebanese in that country. It is not that simple. It is not a 3 word slogan but it is not an easy question-and an even harder solution.

I’ve also been to Mali and Paris…recent locations for lunatics to kill innocents. So why did Paris get so much more media attention than Mali or the children killed in a Pakistani school? Maybe because in the West, we largely only grieve for people like ourselves or where we’ve been, which is probably the norm in most cultures. We tend to forget more quickly about the blonde right wing radical Christian who killed over 70 students in Oslo.

Yet, what to do about Syria? I ask the young men. They didn’t even agree amongst themselves. The English literature student-studying Shakespeare of all subjects-suggested writing children’s books in every language telling people to be kind. Hmm, I’m working on that but in a more practical sense, the other student tried to convince him that surely food, water and safe shelter were more of a priority. They still couldn’t agree amongst themselves.

‘Tell the world about us-please. And give money to the Red Cross or Red Crescent to help those who are still back in Syria and cannot afford to pay the people smugglers. We are the lucky ones who can afford to leave.’

I promised to tell. I’m telling now-as confused as I still am about the politics of the tragedy I am now clear about the human element.

Nearly an hour passed and their companions motioned that it was time for them to get back on the road. I handed my two young dinner companions my business card and the only money I had with me… a 20 Euro note. ‘I wish you luck and this might buy your next pizza when you reach an EEU country’

They threw their hands in the air: ‘We cannot take your money. We are not charity’’

Surprised, I continued: ‘I know but you are university students and when I was a university student, I’d have gladly accepted pizza money from anyone.’ We laughed. Still they refused but engulfed me in a hug as the pizza staff came from behind the counter, thinking I was surely being pickpocketed or stabbed. With tears in our eyes, my young friends walked into the Belgrade night and I back to my hotel.

Exhausted, sleep alluded me. No caffeine but their coffee coloured eye kept me awake. So many questions I wished I’d asked?  So many things I wished I’d said. What can I do now? Why have I been so ignorant?

These thoughts followed me the next day during the drive from Serbia to Bosnia where signs of ethnic cleansing with over 90,000 thousand  killed less than twenty years ago, are still evident-but that’s another tragic story.

I arrived back in Belgrade a week later about 2AM. Alighting from the mini bus, music and lights greeted me in the park across the street from the hotel. ‘Is there a rock festival on?’ I asked.

‘No, just refugees making our city park dirty.’ the driver shrugged. Let’s face it  Belgrade itself was the subject of NATO bombing only 18 years ago and not a place you’d think of as a haven or refuge

The next morning in daylight, I ventured into the now quiet park, apart from the chatter of families clustered on the ground. Yet, this was no picnic for approximately 1000 Syrians and Afghans in this makeshift refugee camp. Imagine the Botanic Gardens with scattered blankets amidst litter, as people queued to wash in the only fountain.  I spoke to a few groups and discovered that before the conflict, they had been dentists, accountants, librarians, shop owners, teachers, leading so called normal lives- like you and I.

These were not poor people-but proud people.  A middle class caught in the middle of a crisis they didn’t start, didn’t want and didn’t have much choice but to leave.

When I returned home, friends asked: ‘Why did you go there? Weren’t you afraid?’

To be clear, I did not seek out a makeshift Syrian refugee camp. It found me in the comfort of my four star hotel across the street from a central city park-and jolted me out of my middle class comfort zone of complacency. Sure I donate to the Red Cross, Medicin Sans Frontiers and World Vision. But that’s about it. 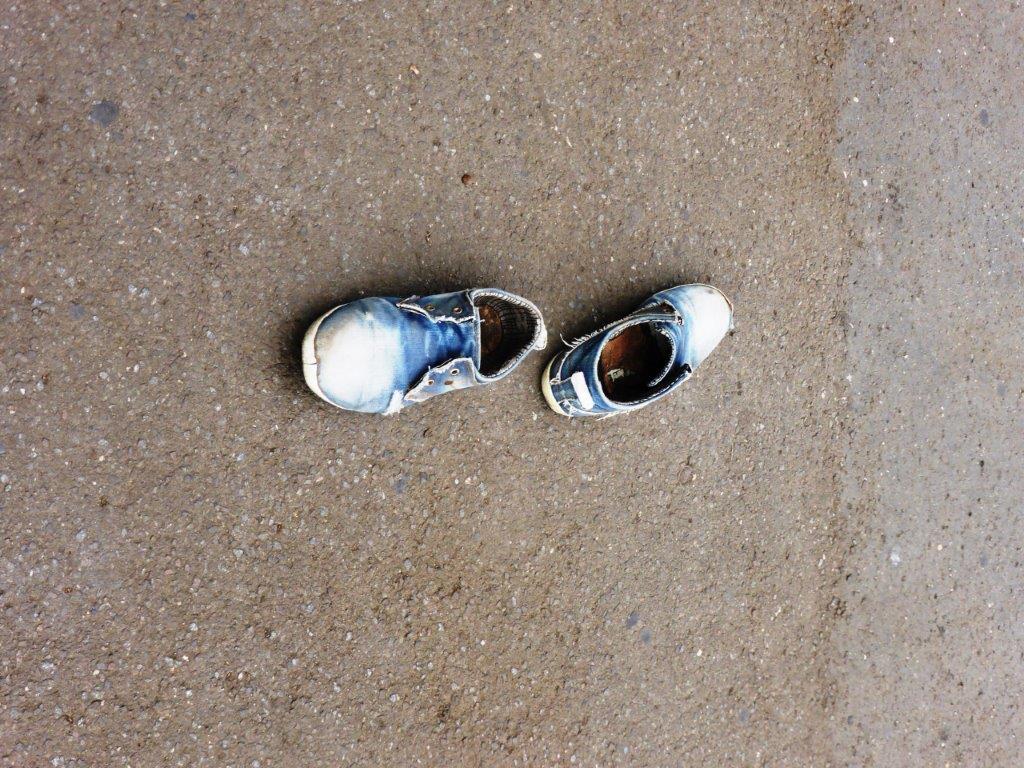 It’s one thing to read about refugees in the newspapers or see them on the news, but when you connect eye to eye and heart to heart-it becomes a totally different thing altogether. A credit card number no longer seems enough.

What can we do-not the royal we-not just our government-but as individuals? I’ve asked that question a lot over the last few months. Maybe I could sponsor one of their sisters-a female university student to stay in my spare room in Sydney? I run this notion past a friend who cautions:

‘Good idea in theory but that student could have all sorts of emotional problems or feel culturally isolated. Think it through. You have never even had kids.’  Good point. Well, maybe a few of us could be a support group and take it in turns? Or a street could ‘adopt’ a student’ or a neighborhood adopt a family? Many maybes.

I still don’t know what to do, apart from easing my conscience with modest donations. I don’t have an answer and don’t envy the politicians we ask to provide those answers-so no political rants please.

But I do know that I’ll never eat a pizza again without thinking about this hot Serbian evening , as refugees now shiver heading north into European winter.

Take away pizza? No, I simply took away a new perspective on my previous prejudices. I’d like to order a solution but there is none on the menu. But guys, I honour your request to tell the world about you in my own words.