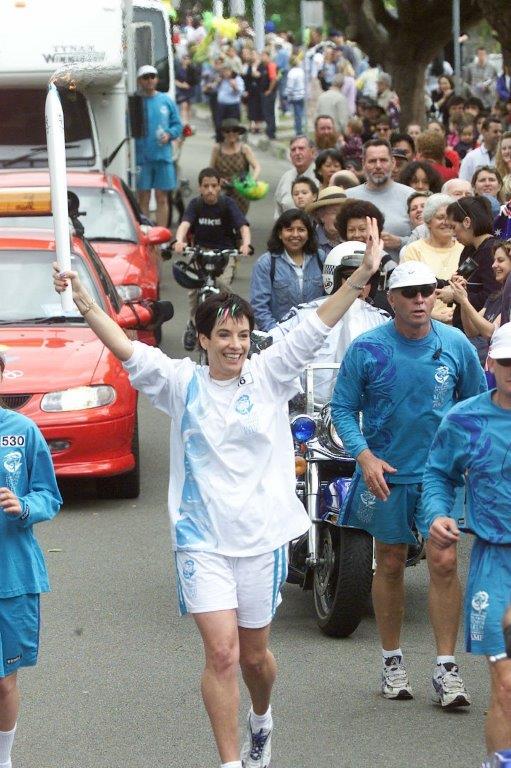 hard to believe twenty years have passed since I was honoured and humbled to carry the Olympic torch on the day of the opening ceremonies of the Sydney 2000 Olympics; one of only 26 people before Cathy Freeman lit the cauldron in the stadium. I’d been privileged to attend the closing ceremonies when the flame was extinguished in Atlanta, and four years later stood at Uluru when Nova Peris began, barefoot, her 100 day journey from the centre of our nation.

ydney hosted the biggest party in our history a few days before my birthday, I couldn’t help but reflect that I never had a 21st celebration because my parents died from cancer that year. An only child with no immediate family, I left Canada with a backpack and $200 for a three month working holiday—vulnerable and very alone.

Many people of all ages feel that way today during this global Covid-19 pandemic, the mood in our community is completely different to the positive vibes in any city which hosts the Olympics.

Since 1896, the modern Olympics has aimed to build a better world of non-discrimination through sport, with a spirit of friendship and fair play that leads to mutual understanding.

Having attended five Olympic Games, I suspect power and commercialism have somewhat muddied those noble motives. Yet there is little doubt that, for at least a brief period in time, athletes, volunteers and spectators from around the globe unite to celebrate sporting excellence and a common connection that requires no common language.

Today, there are no mass celebrations anywhere as scientists throughout the world are in the race of our lives to discover a vaccine. They and healthcare workers of all creeds give their personal best on a daily basis. We all must do likewise in whatever modest or magnificent endeavours we pursue, even in times of job loss and restrictions. We can all just do the best we can with what we’ve got.

During the Olympic Games, many dreams were achieved or shattered in a thousandth of a second. For some, silver medals were disappointing although being second best in the world is certainly no shame. Others, like ‘Eric the Eel’, had their wildest dreams fulfilled by simply competing, even though they finished last. For this African swimmer, who had never before swam in a 50 metre pool, winning was never an expectation so was never a disappointment. He enjoyed the moment more than most, as did so many of the Paralympians, who were an example of courage to us all.

Covid courage is required to ignore the cynicism today; akin to the sarcastic signs that appeared in some retail outlets after the Olympics:

You can stop smiling now—they’ve all gone home.

Now is the time for that unsolicited nod or smile to a stranger. Now is the time to tell friends you care  and check how they’re really doing on a regular basis-not just on a nominated day of the year.

And let’s be a little more tolerant of our politicians on all sides of the fence—because even if we don’t agree with every move they make, it’s too easy for us as spectators on the sidelines to be a critical armchair coaches as we watch the replay of a game with 20-20 hindsight. Let facts and science be the referee.

‘Life is the biggest and fastest game of all and when the final score is in, it’s not whether you won or lost but how you played the game.’

While a vaccine seems high out of reach and there’s no rule book for this waiting game, Victorians are asked to sit on the sidelines a bit longer. National and global goal posts are constantly moving but the viral ball remains in our court.

We have to cope with it as best we can, one day at a time, and remember that we are still on the same team. No matter how dark times may seem, we must not let circumstances permanently extinguish our dreams.

As a member of the Sydney 2000 torch relay, with every step I took I felt a small part of something much bigger than myself—the international goodwill that was so readily shared as we opened our doors and our hearts to worldwide visitors.

I may have missed my 21st b

irthday celebrations one September a long time ago when I arrived in Australia with my life at an all-time low. I never could have imagined that the biggest problem of my life would turn into the biggest opportunity of becoming an Australian citizen; and a quarter of a century later, life was near an all-time high when I carried that torch on behalf of my adopted country on September 15, 2000.

Twenty years hence, like the Olympic flame as a symbol of hope burning eternal, let’s rekindle that spirit of kindness and common connection—albeit remotely and with social distancing.

VIDEO of torch relay on Day of opening ceremonies

PS The Dutch translation of DeVrye is Freeman…